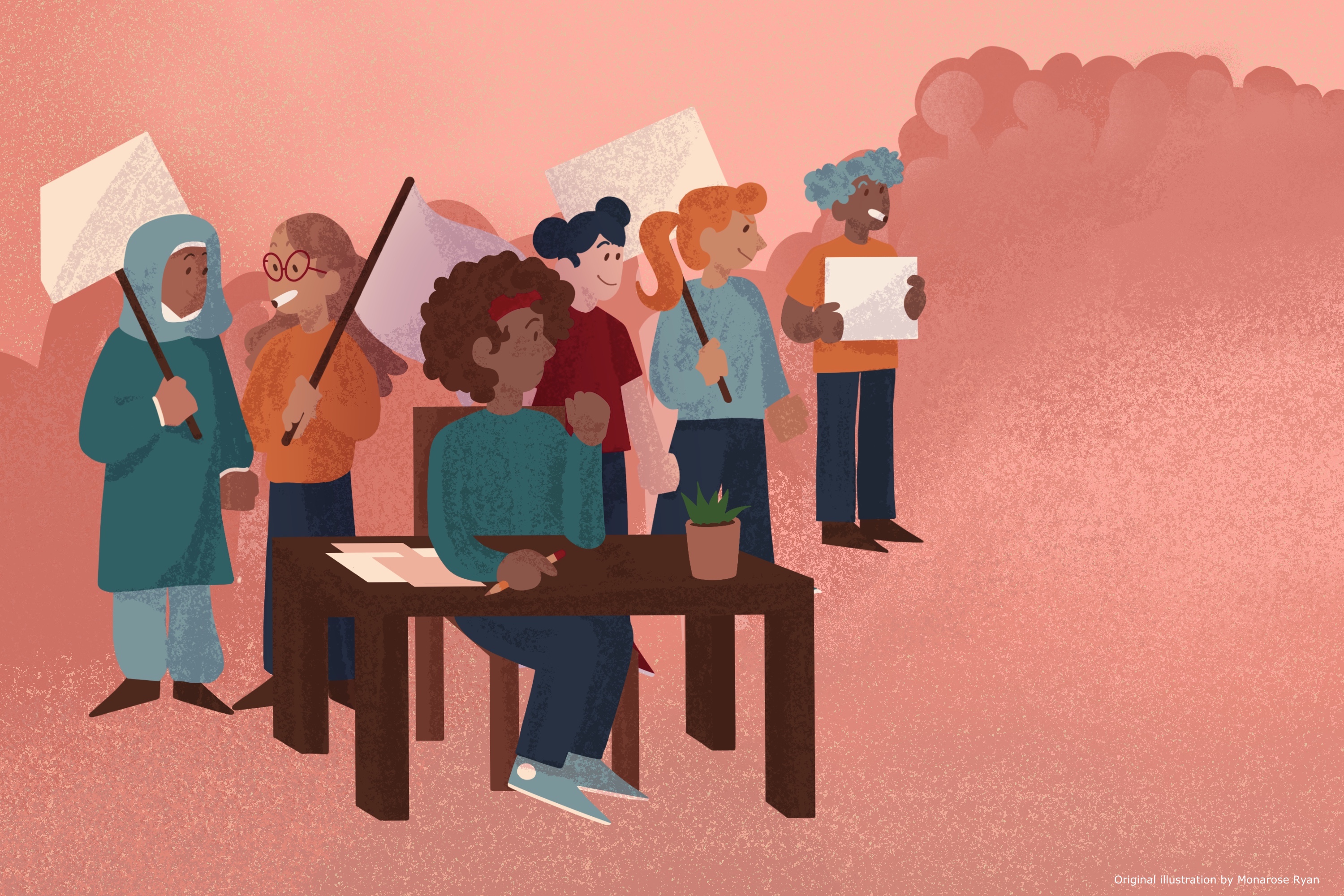 1984: The Year I Discovered "Diversity, Equity and Inclusion"

As futuristic as it once sounded, thanks to the novel by George Orwell, the year 1984 didn’t stand out because of a dystopian society. Instead, I remember it as the year I experienced my first diversity, equity and inclusion (DEI) moment, long before I’d ever heard the abbreviation or the term uttered. There was not a mention, not a peep. If I had heard it, I would not have known what it meant.

In 1984, I was more than 20 years away from focusing on DEI at KPBS in San Diego. When I encountered the topic, I felt frustration and resentment. Not because I took it as a personal affront, but because it left me having to complete someone else’s work.

I attribute these feelings of discontent, in part, to being an American-born Venezuelan, having spent most of my childhood living in Queens, a borough of New York City. While my brothers came and went as they pleased, my family did their best to raise me to be a proper daughter with many of the restrictive traditions by which a Venezuelan female needed to abide. This included chores on Saturdays and church on Sundays.

In 1984, I was in the fifth year of my career at KCTS, public television in Seattle. I had recently hired Beth, a student from the University of Washington, who was majoring in communications and eager to learn. Beth was amiable and appeared to be a good fit for our department, and, though I didn’t see it then, I’d eventually come to see that Beth was an activist, more socially aware than I was, with a mind of her own. What’s more, she wasn’t shy about knocking down established norms of the day. Whereas exhibiting such behavior went against everything I believed in.

Unlike Beth, any mind of my own that I might have possessed had been molded and shaped by my parents’ careful oversight and by the mores of the day. Let’s not forget that in addition to being a Latina, I was a Baby Boomer. This meant that, like most girls my age, I was raised on TV shows about sweet, loving housewives who wore pearls while vacuuming and baking pies. I’d see films starring Doris Day, who’d always get her man, and I was encouraged to “play house” in kindergarten while the boys played at being firefighters and astronauts. What’s more, my imaginative play consisted of my Barbie doll marrying Ken over and over, and mindless hours drawing in bridal coloring books.

Feminism might have been in full swing, but I found myself choosing the traditions of being female in America against the backdrop of the feminist movement. I was firmly and decidedly a product of my culture and generation.

It was a day when we were on deadline and Beth stopped by my desk, placed a stack of flyers on top of a report I was editing, and said,

“I made the copies of the flyer you asked for, but I’m not mailing them out.”

I was confused. “Why? It’s part of your assignment.”

“It’s for the Rotary,” she replied. “I don’t support them and will not contribute to their operation.”

“The Rotary is for men only,” she blurted. “They don’t allow women!”

Okay, now I was getting it. In my years of growing up in New York, I hadn’t come across the Rotary and if I had known about the men-only policy, I’m not sure I would have given it a thought. To me, it was just the way things were.

Not sure what to do about Beth’s refusal to finish her work, I took the flyers to Jeff, who was my boss and director of the department. I explained what had happened, knowing that Jeff didn’t like to be bothered with such everyday details. He had made it clear to me early on that as long as I met the deadlines and did the work, how I went about it was not important. Still, this time I needed his input. But he shrugged and smiled and gave me a look that said it was up to me to resolve. With teeth firmly clenched and exasperation on my brow, I headed back to my desk. Beth had already left for the day. It was up to me to finish her assignment after all. She had washed her hands of it.

I began to mail the flyers out to every member of the Seattle Rotary, taking note with each envelope I addressed that there was not one female name in the group. I finished the work, meeting the deadline, but what happened that day stayed with me. By the end of the week, Beth had resigned, likely sensing my lingering dissatisfaction. I was relieved by her decision, feeling we needed employees who were prepared to actively contribute to departmental efforts without interference from personal beliefs. Besides, I didn’t care about the Rotary International’s no-women-allowed policy. It wasn’t as if I was planning to become a member.

Now, looking back, it feels strange to have so easily overlooked this injustice to my sex. At the time I couldn’t see what Beth saw: Such policies, which were not unusual at the time, were denigrating to all women.

I had spent so much time being indoctrinated on the way women were supposed to behave that I had missed the whole point of the feminist movement: Equal rights and access to opportunities for all, and that included allowing women to become members of the Rotary. Two years later, the Rotary International voted to allow women, though it took the U.S. Supreme Court to make it happen. Hearing the news made me remember Beth. She stood up for what she believed in at a time when many were not. The inconvenience she caused me eventually helped me see the first in a string of inequities in my long career in public media. Over time, what troubled me most was that I didn’t do a thing about it when I had the chance.

As years passed, and I saw more and more groups speak up for equitable treatment, I began to wonder how I fit into this picture. It occurred to me that perhaps I’d been a victim without ever realizing it; I’d gotten condescending behavior from people in leadership and missed a promotion. Had I let these incidents go over my head without a second thought? A troubling sadness burrowed into me as I began to feel the weight of these inequities on my shoulders.

When I later joined KPBS, I reported to a leader named Deanna Mackey. She believed in me, and on her team my confidence in the unique contribution I could make to our organization deepened. One day she approached me about taking on the responsibility of diversity and inclusion for the station, a job that I did not take lightly. I did smile, however, when I received an invitation to speak to a local chapter of the Rotary in San Diego. I wished Beth had been there to see the women in the audience, some who did not seem to be aware of the sacrifices which had been made for them to be there. During these past five years in that role, as I became involved in donor cultivation in diverse communities, I’m gratified to know that I helped the station become a little more diverse.

But there is still much to do and understand about DEI. I learned, through a decade of working in this field, that we cannot take on this responsibility alone. It is best achieved by having buy-in from management and colleagues. To do this, we must commit to it together, persevering, no matter what barriers we face from others. Never give up the good fight, for the power to call out inequities when we see it, is inside all of us. It takes courage and fortitude to speak up.

There was a time when I lacked the wherewithal to speak my mind. But with time I did and there are many ways to go about it. Tell your story or share the stories of others you’ve met. Share the statistics about DEI in your market, making them relatable. Visit local neighborhoods and talk to the people who live there. Listen to them and learn what the needs and challenges are and how your station can help.

Speak your truth, and, as you do, the courage, compassion and understanding you need to do this work, will grow and lift you. I know for some this can be challenging, but start somewhere. I believe that the next generation will persist. They will be the ones to right the wrongs. This time, I’m rooting for the Beths of the world. 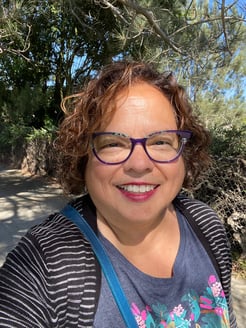 Monica Medina has spent 40 years in public media from Seattle, where she met Beth, to San Diego, and including a three-year stint in Station Relations at CPB, Washington, D.C.

She spent more than 25 years at KPBS where she began her work spearheading major outreach campaigns and initiatives for children and families, including participating in a media literacy training for her first DEI-related initiative, KCET’s Puzzle Place Workshops for childcare providers.

In 2009, Monica was asked to take on DEI for KPBS. In this capacity, she created new programs, such as Community Conversations, designed to educate our audience and staff on issues impacting our diverse neighborhoods. She also attended countless DEI events throughout San Diego and found opportunities for management to make presentations to diverse organizations. Monica has served on the boards of the California Diversity Council and the San Diego Asian Business Association. In addition, she assisted in developing initiatives to help staff gain insight into San Diego’s diverse communities.

Today Monica is getting ready for the next chapter of her life, reinventing herself in retirement. With a B.A. from Brandeis University and a Master’s in journalism from the University of Maryland, she is looking forward to life as a freelance writer, embracing her passion for the written word.

She has two grown children, Joshua and Sarah, and enjoys taking walks with her two dogs. She also is a long-time aficionado of theater, improv and piano. 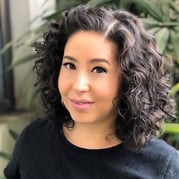 Illustrator Monarose Ryan is the founder of the creative co-op The Pink Librarian and is an itinerant creative—having lived in both several states and countries over the last five years. With over ten years of experience as a designer, her constant has been to create work that betters the community and makes a positive impact on the world.