The city where I grew up – San Antonio, Texas – was majority Latinx, but by no means unsegregated. The East Side was predominantly poor and Black, and much of the South and West Sides were poor and Brown. If you were an upwardly-mobile POC, you moved to the city’s whiter, more affluent northern suburbs. That’s where my assimilated, single mom – originally from the West Side – raised me, with help from her Mexican immigrant parents and, eventually, my SoCal Chicano stepdad.

As a white-presenting mestiza (raised in white suburbs, no less) I am, in the words of Leslie Arreoloa-Hillenbrand, “both colonized and colonizer.” To be white-presenting is to live a duality: to both benefit directly from racism and be privy to the psychic pain it inflicts. It’s an eternally uneasy place to live.

When I was 31, I moved to Minnesota, and it was nothing short of culture shock. Exposed to people and cultures with which I’d had no prior experience – Somali, Hmong, Ecuadorian, Ojibway, Dakota – Minneapolis made me realize how diverse San Antonio actually wasn’t. New to me was the experience of feeling my whiteness so blaringly.

Shortly after arriving, I landed my first job in public media as an administrative assistant at Minnesota Public Radio. At the time, I was one of very few ethnic minorities or people of color at MPR. There were a few – I bonded early with another Tejano colleague, a fellow Black assistant who eventually rose in MPR’s ranks, and a rotating-door of Latinx journalism fellows – but there weren’t many. At one point in my ten-year tenure, despite Minnesota being home to the largest Somali population in the U.S., the only Somali in the building was on the janitorial staff. New to me was the experience of feeling like the only minority for miles.

Minneapolis was also the first time I’d witnessed acute segregation. Months in, I learned that the city’s predominantly Black North Side was a kind of island, when three consecutive taxis refused to drive us to a friend’s house there. I knew San Antonio’s East Side suffered grave inequities, but I’d never heard it spoken of as if it were some dangerous other country.

To be clear, racism and the inequities it creates are global; Minneapolis is not unique. But, for me, my ten years spent in the Twin Cities was eye-opening and oftentimes uncomfortable, even with the protections my whiteness afforded me. There were things I loved about the place, too, which made leaving – when I took a job in Texas – feel like the end of a failed marriage. On my last ride to the airport, I watched the buildings of downtown Minneapolis shrink in the car’s rear window and thought: Welp, we tried.

Last month, I sat in the safety of my Austin living room, phone in hand, watching video footage of a gas station burning two short blocks from my last apartment in Minneapolis. I felt a lot of things – sadness, anger, worry – but surprise wasn’t one of them.

For a lot of non-Black folks, George Floyd’s death and the ensuing events in Minneapolis have resulted in a long-overdue reckoning. For me, personally, it’s been the start of a domino-chain of internal questions, one being: What happened to me?

While still an admin at MPR, I pitched to the news editor a first-person audio essay around my culture shock. He was interested, and I – hungering to move from spell-checking CPB grants to creating content – was thrilled. But that excitement deflated when he handed back my edited piece. Not only had the fangs of it been filed down, but his rewrite completely flipped my thesis to the reverse argument. I pulled it, and that was the last conversation I had with that editor before he left MPR.

But I didn’t sit down. I shared a cubicle row with a white male reporter, and made it a personal mission to point out repeated moments of cultural othering in a show he produced, as well as other linguistic missteps in MPR’s reporting and external messaging. I called out the membership team for zero diversity in their drive campaign images. (It should be noted that my next job after admin was as MPR’s drive manager; smart directors – and I had one in membership – don’t just listen to critique, they recognize its value.)

Here at KUTX, I’ve continued to serve on DEI groups for both the station and our college. But I recently realized that I’ve been significantly less vocal over the last decade of my career than when I first began in public media. In DEI workgroups, I’d speak in all caps, but outside the safety of those spaces, I’d demure. On countless occasions, I remained silent in the face of microaggressions and veiled racist language, essentially throwing my colleagues of color under the metaphorical bus. Why? For the sake of “work relationships.”

I worried a lot less about these relationships when I was in an entry-level position, with little to lose, at an organization where I already felt like an outsider. But the higher I’ve risen through white-dominated hierarchies, the more I’ve retreated inside the cocoon of my privilege. I now realize that these “work relationships” are really just the comfort of white folks in power, and my own comfort as an ethnic minority inheriting that power. It’s – and there’s no FCC restriction to me saying it here – shitty. As someone who likes to think she’s been fighting for racial equity for most of her public media career, it was a shameful realization.

And while it’s no excuse for my silence, it’s made me aware of the obstacles that power structures throw in the way of real change in our industry.

Public media has a diversity problem – this shouldn’t be news to any of us. And while it’s been heartening to see the audience at PMDMC grow increasingly diverse in the 12 years I’ve been attending, we have a long way to go as an industry. (Anecdotally, I’ve noticed more diversity at PMDMC than PRPD, which is – to use the backhanded Minnesota idiom – interesting.)

To quote Sam Sanders: We want a new paint job on the car when what the car really needs is an entire engine overhaul. One way we can begin public media’s overhaul – right now, regardless of hiring freezes or trimmed budgets – is to examine both power and labor in our organizations.

Diversity among our senior leaders is critical. But what about the decision-making that happens in non-leadership roles? Are there BIPOC on our membership, marketing, music, and editorial teams? And are there enough of them? It’s not just about avoiding tokenization; there’s safety in numbers. Critical mass of BIPOC is required to disrupt old power dynamics (like unconscious dismissal of BIPOC opinions by majority white staffers) and break patterns of decision-making that are based solely on white experience.

Who is doing the actual labor of DEI at your station? Traditional DEI task forces were well-intentioned – involve staff, give them a voice – but have they become a way of extracting managerial thinking from staff who aren’t paid managerial salaries? Have they, by attracting POC and ethnic minorities who care because they can’t not care, put the labor squarely on the folks who shouldn’t have to do it? Public media leadership needs to stop asking rank-and-file staff What should we do? and, instead, create DEI plans, then solicit feedback – as well as sign-off – from staffers of color. That’s how leadership in public media can give BIPOC a voice. Not by making them do the work for leadership, but by having the courage to literally flip the hierarchy: We (leadership) work for you (staff.)

In terms of power, we also need to be aware that a DEI policy of if you see something, say something is easy for leadership to ask of staff, but a lot harder (and riskier) for staff – especially BIPOC – to deliver. “Open door” policies favor staff who feel safe enough to report concerns – whether that safety comes from privilege or having a low-stakes role. For non-management staff and middle-managers, especially BIPOC in these roles, the cost of reporting is high: Negative perception of a dissatisfied staffer (from complainer, to not-a-team-player, to the dreaded always-makes-it-about-race) could adversely impact their effectiveness at work, or worse, their bottom line (via a lack of merit increases and/or advancement). As a result, BIPOC (as well as women, LGBTQ, disabled, and other historically disenfranchised staff) are forced to run a constant cost/benefit reporting analysis for each and every microaggression. That’s mental energy that could be used, instead, on their actual jobs. Managers (myself included) must be inquisitive with our teams by proactively, consistently seeking out potential DEI issues instead of waiting for them to come to us. It’s not fun work. It’s exhausting. But it’s not above-and-beyond work that lives somewhere outside of our job titles; it’s managing.

Lastly, an overhaul won’t happen until we make it an unreasonable commitment. What does it mean to be unreasonably committed to that overhaul? It means we’re willing to make DEI our Business Priority #1 – to filter every decision through its lens – even now, when our future feels shaky. It means we’ll approach big decisions from a position of intersectionality, especially now, when our future feels shaky. And it means we’re prepared to screw up – say the wrong thing, take the wrong approach – but listen, learn, and keep going.

Public media, in particular, tends to attract the do-gooders: people who want to make the world better by building an informed citizenry, supporting the arts, and convincing children everywhere that gro-own ups come back. It’s this do-gooder nature, though, that makes it so hard to stomach when we do poorly, to the extent that we’ll choose the comfort of inaction over the discomfort of being called out for failure. If I’ve realized one thing, though, it’s that every call-out (including one that personally inspired this essay) is actually a gift - an opportunity to renew our commitment by learning and leveling up. Public media can’t do good until it does better. 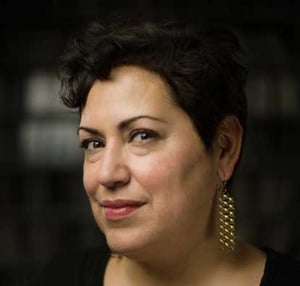 Jacquie Fuller lives in Austin, TX with her spouse and seven-year-old daughter. Since 2015, she’s worked as the Assistant Program Director at KUTX 98.9. Prior to that, she lived in Minnesota where she worked in Development at Minnesota Public Radio, was an on-air host at MPR’s The Current, taught Chicano Studies courses at the University of Minnesota, and co-founded the Prairie Fire Lady Choir. She has an MFA in Creative Writing and a BA in Art History.