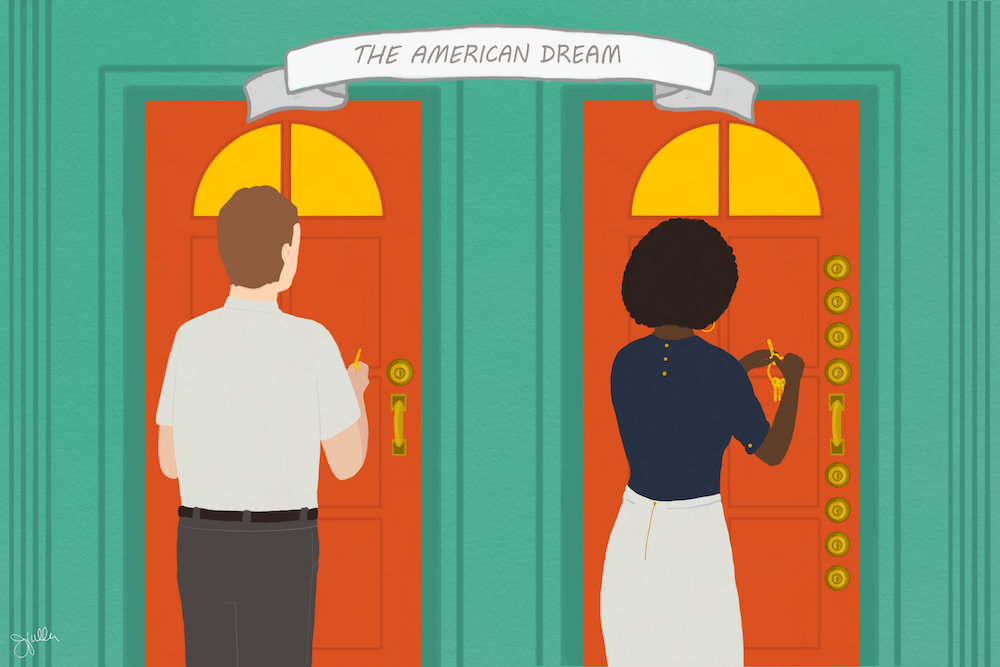 Public Media: Existing Within the Shadow of White Supremacy Culture

White supremacy is all around us. If you are aware of this, congratulations, you are on the road to recovery; the first step is admitting it. If you are struggling to grapple with this concept, know that you are not alone. This statement may challenge your inner spirit, causing denial and a sense of panic followed by a twinge of anger. I know this because I have felt it. These powerful, pessimistic feelings show up in our actions, and interactions with others, when merely the ideas of racism and racial bias are hinted at. This is how white supremacy wins every time.

Conversations around systemic racism in our society are far from new. Mountains of data, studies, and reports offer stark evidence that, in the United States, the systems we all rely on were intentionally designed to marginalize and oppress Black and brown people. Yet little progress has been made to change them. Why? Because white supremacy has been the standard throughout. We default to beliefs, actions, and characteristics that promote and uphold whiteness. If it’s not white, it’s not right.

Those of us who resist this construct, do so at a personal cost. In an IRE & NICAR webinar back in early June, Matt Thompson, Editor in Chief of Reveal, spoke to his experience of being a Black leader in media and the “compromise” he makes, which results in fostering narratives and reporting that appeases mainstream audiences. “I think those of us who are leaders of color in this field ... are conscious of how much we owe our communities. And to be real for a second, I personally am conscious every day that the advancement that I have had in this field is premised on some level on my palatability to white folks. That means on some level, every decision I make is the product of a compromise with white supremacy.”

The “compromise” Matt speaks of sums up so much of what I have felt, not only in my time in this industry but throughout much of my adult life. Growing up in a predominantly white neighborhood in a household with one white parent, I was firmly rooted in the traditional “American Dream.” Yet, my environment lacked true appreciation for or inclusion of non-white experiences, ideas, and voices. This quietly reinforced the unspoken reality that the American Dream looked, acted, and was white. Even my proud Kenyan mother could not compete with my schooling and surroundings when trying to continue speaking in Swahili to me. I pushed back against learning the language until she gave up.

In college, I finally witnessed the breadth of racially diverse experiences when I moved from my small town to a major city that seemed intangible in my former white bubble. But even with all the “diversity” around me, I still unconsciously upheld white supremacy as the be-all end-all of success. Looking back, those who I deemed as “successful” were well-educated, employed, financially secure, had social status, physically and mentally healthy, etc. The ideals I strived for in my personal life and career were the characteristics of white supremacy culture. If my upbringing was the foundation for white supremacy, then my early adult years were the walls that supported and upheld these ideals. The proverbial house being built in my “American Dream” was coming along nicely. Little did I know, I was complicit in supporting a system that intentionally brings affliction to people living in the margins of society. The compromises people of color make are concessions to oppressive actions and behaviors, normalizing white people's superiority as just. Again, white supremacy wins.

For some, it’s difficult to conceive and truly understand the havoc white supremacy culture is wreaking on our modern society. It’s a third-rail topic; those who choose to unearth it risk losing the attention of their audience. We immediately correlate white supremacy with overtly racist ideology (think Nazis and the KKK) instead of taking the time to untangle the structure developed and maintained by those who hold power. This causes people to lean out with their hands up as if to say I’m Not Touching This or This Is Not My Problem; it is a refusal to succumb to discomfort.

For those on the receiving end of the punitive behaviors white supremacy upholds, discomfort is our default. We tiptoe around demeaning behaviors, or flat out hold our tongues, because we worry about being labeled as a problem or a disrupter to the status quo. Going against the grain or challenging stifling environments is seen as harmful to a seemingly perfect construct. Doing so brings a different set of risks if you’re a person of color. This causes us to compromise our principles, raise our white flag and retreat. Another point added to white supremacy’s scoreboard.

Before I dove headfirst into my career in training and DEI, I was a firm believer that we live in a meritocracy. That anyone -- regardless of class status, race and ethnicity, or upbringing -- can achieve whatever level of success they hope to attain with unwavering diligence and sheer grit. I believed that the universe balances in favor of those who persevere versus those who quit or complain or both. You can find this idea baked into every corner of our society. Parents and teachers promise “if you put your mind to it, anything is possible.” The media depicts both fabled and real rags-to-riches stories and we eat them up because the stories are compelling to the point of inspiration. Actors, musicians, and athletes who came from tough backgrounds to reach the highest levels of fame and fortune are deemed as the example. In reality, meritocracy is a pipedream sold to those who have less status but attained by those who have access to resources and privileges.

Yale law professor and author of “The Meritocracy Trap” Daniel Markovits explains it plainly in an interview with Hari Sreenivasan, “We have this idea that if you’re judged on your merits, there’s equal opportunity for everybody. The problem is that when some people have a lot more resources to train their children than other people, then even when the kids get judged on their merits down the road, those who got the most training will have the most merit. And that’s not because they're naturally smarter or more virtuous. It’s because their parents invested in them in a way in which nobody else’s parents could… it has the consequence that now the rich and the richest kids win the meritocratic competition and everybody else loses.”

Traditionally, merit is garnered through rigorous achievements, such as obtaining advanced degrees, winning awards, or gaining positions of importance. However, in looking at the ubiquitous stronghold white supremacy has on our society, it is nearly impossible to acquire merit without some form of wealth or social currency. We can even take race and ethnicity out of the equation and recognize the pathway to “success” is much longer, and riddled with obstacles, for those who are economically disadvantaged or neglected.

Our industry has long embraced the myth of meritocratic practices. In programming, impeccable production quality is unequally weighted in comparison to the content itself, allowing high-gloss programs to regularly take over primetime schedules. In reporting on systemic inequities, editors prefer questions be posed to someone with academic knowledge instead of a community organizer/activist because academia trumps lived experiences (we see this in commercial news commentary and op-eds, too). Membership departments favor and reward wealthy donors, providing exclusive access to show hosts and notable journalists. Hiring managers prefer people with previous public media experience over those with backgrounds missing from our airwaves, audiences and organizations. If we want to truly diversify and develop inclusive public media practices, we must uncover and root out these forms of meritocracy. They are a veiled form of supremacy.

Take a moment, right now, to take stock of your emotional and physical responses to this argument. You may feel a sense of denial; you may feel a sense of relief. You may experience the heat rising through your body or a more rapid heartbeat; you may feel overwhelmingly weary. These responses are completely normal and part of the human condition. However, if you do not feel anything, or you feel detached from anything I have written, I worry for you. As more people of color become vocal about their experiences and demand equity after years of empty promises, self-reflection and empathy must be the way forward.

I will leave you with a quote I often heard during my time at KPBS as we transitioned to a converged newsroom: “If you dislike change, you’re going to dislike irrelevance even more.”

The door has been opened and, because of ongoing national discourse and our changing national demographics, there is no going back. Those who continue with business-as-usual will fail. Dismantling white supremacy in our industry will take a great deal of discomfort, much of which will be felt by those who benefit from it more than by those who are oppressed by it. Only through humility will you see where you stand. 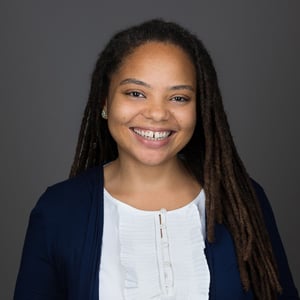 Consuela “Sway” Steward has more than 10 years of experience working in public media. She has produced and led presentations and panel discussions on topics including media’s influence on our biases, inclusive reporting and content, leading with empathy, and storytelling in the workplace. She got her start in public media as a part-time student assistant in KPBS’ web department while earning her bachelor’s degree in journalism from San Diego State University, where the station is located. Sway returned to KPBS to take on the executive assistant role and became a trusted liaison between the executive office and staff. It was through this role that she found her calling in training and development through the lens of diversity, equity, and inclusion.

After earning a certificate in human resource management, Sway transitioned to a role as KPBS’ training and employee engagement specialist and implemented strategic solutions centered on leadership training and professional development to promote an engaged workforce and inclusive culture. She also chaired its Diversity & Inclusion Council, leading initiatives to advance recruitment efforts and track show guest identity data to better reflect San Diego both within the organization and in its reporting. In her consulting work, Sway continues to coach, counsel, and train on topics around DEI. She launched the Public Media Professionals of Color as a place for BIPOC-identifying employees, interns, and volunteers to convene and foster community across disciplines. She’s also a founding advisory council member of the Public Media Women in Leadership, which focuses on mentoring and supporting emerging women leaders in our industry.