The Need for Sustainers Is Bigger Than You Think

NPR News stations have a fundraising opportunity they’ve never had before and might never have again: the opportunity is to turn significantly more listeners into sustaining givers. Why now? On March 11th, David Giovannoni, President of Audigraphics, Inc. and longtime public radio researcher, wrote in Current that “The events of the last 10 months have accelerated longstanding trends in listeners’ relationships with their NPR News stations. Today listeners to NPR News stations rely more on these stations than ever. The programming is more important to them than ever.”

Audience 98 showed us that listening causes giving. But listeners give only when they become core listeners, and even then it can take up to a decade (or more) for a listener to become a giver. It’s clear that the time to translate increased loyalty into sustaining giving is now.

Seizing upon increased loyalty to create more sustainers isn’t just something we can do, it’s something we must do. The revenue stability we can create from increasing sustainers will be a necessity as we grapple with changing listening habits and a greater-than-ever imperative to build new audiences.

The pandemic upended listening to all radio as many Americans made the switch from commuting to and from work - and the radio-listening that happened during this commute - to working from home. It took many months for listeners to establish new radio listening habits at home. Fringe listening was hit especially hard. Public radio’s fringe listeners are the seeds of its future core. Stations that participated in Greater Public’s FY19 and FY20 Benchmarks for Public Radio Fundraising saw a 4.65% decline in listening year over year. On the surface that’s not a huge loss, but consider that the FY20 Benchmarks, which covers the period from July 1, 2019 to June 30, 2020, overlaps with only the first three months of the crisis and even in that short time many Benchmarks stations saw much bigger declines in listening compared to the group as a whole.

Public radio has started to build back its listening but we haven’t regained all of the listening we had before the pandemic. Even if stations could bring back every listener they had before the pandemic, recent events suggest that’s no longer enough. The biggest intersecting stories of the past year compel public radio to serve a more diverse audience. As Americans struggled through the pandemic they’ve also seen growing demands for accountability on racial justice and on systemic inequality in healthcare, education and economics, three of the biggest factors that drive the quality of life in America.

Public radio’s mission and values are well suited to addressing these big, intersecting stories. NPR News stations have built  – and continue to build – newsrooms staffed by journalists who have the skills and experience needed to tackle the monumental matters of our time. Public radio has strengthened its journalistic foundation against a backdrop of a steep decline in local journalism resulting from broken economic models in the commercial sector. In short, public radio has what it takes to attract new audiences.

Stations have thought and learned a lot about the listeners they serve but haven’t given as much thought to the listeners they should serve in a nation that has undergone significant change over the course of public radio’s 50+ year history. The Public Broadcasting Act of 1967 established public media as we know it today. The Act says, in part, that public broadcasters will be “responsive to the interests of people both in particular localities and throughout the United States, which will constitute an expression of diversity and excellence, and which will constitute a source of alternative telecommunications services for all the citizens of the Nation.” Public radio has never served “all the citizens of the nation,” and the need to attract and serve a more diverse audience has never been more important.

We can only hope to attract the audience we need to serve if we have stable funding for the service we have.

Since its inception, public media has been funded in large part thanks to listeners and viewers who feel a sense of personal responsibility to contribute because they use our service. Without abandoning our core appeal we must reach beyond it like never before to appeal to donors who share our belief that serving a bigger and more diverse audience is critical to the future of our democracy. Meeting these audience and funding challenges depends in part on creating more efficiency in our current approaches to fundraising.

A Strategic Approach to Getting and Keeping More Givers:

Public radio listeners don’t become core listeners, let alone givers, without first discovering the service and building their reliance on it over time to the point where they choose a NPR News station as their favorite. And creating more efficiency in our current fundraising programs is largely about turning more non-givers into sustaining givers, a lot more sustaining givers. The picture below tells us why: 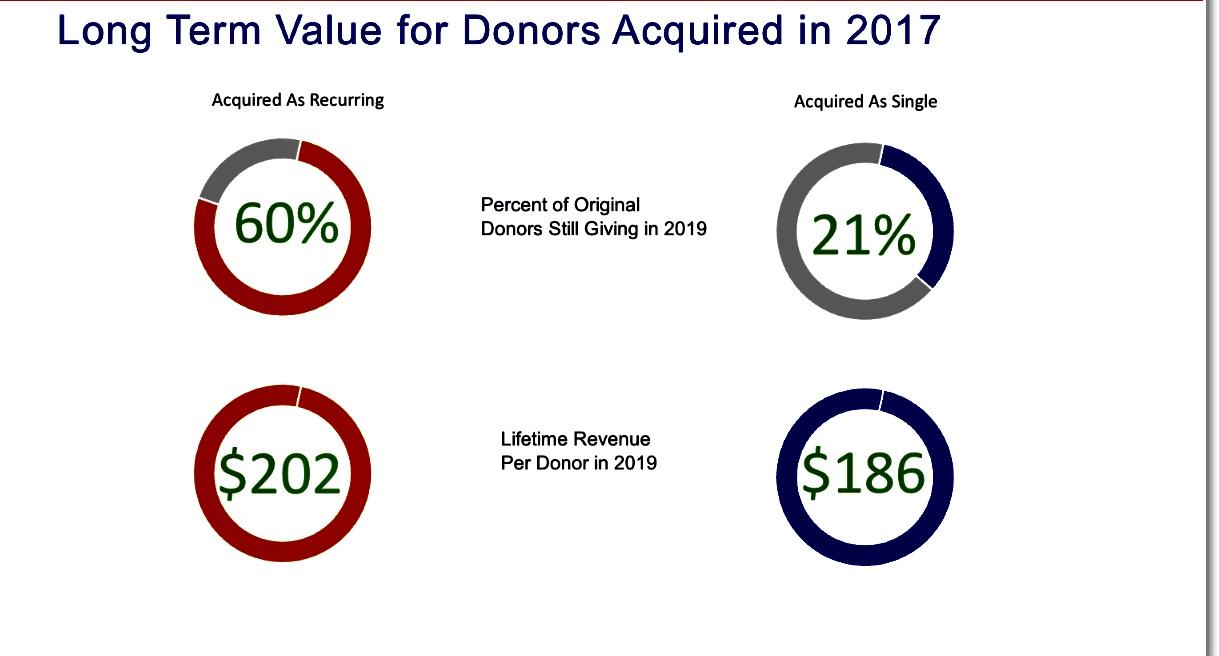 This data, compiled by Target Analytics from Blackbaud and shared courtesy of Deb Ashmore, shows how important sustainers are to public radio’s long term financial health: Compared to single-gift givers, sustainers give more money and they give over a longer period of time.

Greater Public Benchmarks stations have shown us that we can turn 70%-80% of our givers into sustainers. The vast majority of public radio stations are below this mark, by a little in some cases and a lot in others. It’s time to set obstacles aside or solve them. It’s time to catch up. It’s time to move fast – and faster – when it comes to turning more listeners into sustaining givers.

The Tactics That Support a Successful Strategy

Capturing increased loyalty to bring in more sustainers doesn’t happen by accident. For many stations, donor acquisition begins and ends with on-air fundraising. But whether you bring in your new donors during your drives or expand your efforts with mail, email, newsletters, canvassing, or other tools, they all need to be built around acquiring sustaining givers. This includes the messaging that draws in potential givers and the back-end systems that lead them down the path to monthly giving. It also includes the infrastructure of your donor-relationship team, and how you reward them for their loyalty, ask them to upgrade and make additional one-time gifts based on their interests, and help them to seamlessly continue their giving by catching them if they lapse. Look for tips and inspiration in our Next Level Sustainers toolkit.